A new hospital in Cramlington, Northumberland, is the first in the NHS to be purpose-designed for emergency cases. Neil Harvey of Ramboll explains how the building simplifies the route from admission to specialists using a ‘panopticon’ ward design

The Northumbria Specialist Emergency Care Hospital (NSECH) project was initiated by Northumbria Healthcare NHS Trust with the aim of creating a specialist emergency care facility that would optimise emergency care by centralising all its expertise in one location. Due to the geography of the trust this was only possible by building a new facility, which would be the first specialist emergency care hospital in the UK. Statistics show that mortality rates can be significantly improved if patients are seen by specialists as soon as possible in the ‘treatment journey’, therefore the vision for the hospital was to maximise survival and good recovery. By improving recovery rates patients’ stay would also be minimised, which has multiple advantages. The brief was for a hospital that provided eight wards (316 beds), an intensive care unit providing specialist critical care for up to 18 patients, clinical diagnostic (MRI and CT scanners), five operating theatres, and a children’s emergency assessment unit. Also included are a maternity and special care baby unit, a helipad and ambulance deck, service yard and energy centre, and on-site parking for 729 cars. The design process involved representatives from the clinical consultants, senior nurses, facilities management staff and patient groups. They were involved in all areas, with a three round user group review process. To complete the process in the required time three groups were run in parallel, each lead by an architect and two CAD support staff. 3D model layouts were used, which were fully modelled with equipment in order that the users could make informed decisions.

The key focus was to keep travel distances short, achieve key adjacencies and to ensure that staff could easily see patients. The unusual shape of the building emerged from this thought process with the form developing as a series of curves and circles. Although these were not directly taken from previous examples of panopticon design, the process led to a form that is well understood and tested as an architectural concept. The wards are a strong example of this, designed so that from a single point within each hub a nurse can see into each of the seven rooms. The main departments also drew on this concept, with A+E at the centre of the building surrounded by diagnostics, X-ray and paediatrics, close to the ambulance drop off. This minimises time from arrival to treatment and is intended to provide immediate access to specialists. The staff experience was also key – with large departments the distance the staff had to walk between rooms could have become significant, but by designing the wards and departments as circular, not only were travel times reduced but it also gave the staff the sense of being able to see patents and colleagues. This allowed the large departments to maintain a closeness and efficiency that couldn’t have been achieved in a traditional hospital layout. By focusing on important clinical adjacencies and with early stage input from clinicians on how rooms were used the architect could ensure the best possible environment for patients and clinicians.

Although only three stories tall, the footprint of the building is significant, with large floorplates to achieve the required adjacencies. The spit between floors is typically arranged so that consultants’ offices, ‘back of house’ and services including dedicated delivery yard are located on the ground floor; A&E, diagnostics and paediatrics, main entrances, helipad and ambulance deck on the first floor; and theatres, maternity and the special care baby unit are found on the second floor. This creates a main A&E Hub in the centre of the building at first floor, surrounded vertically and horizontally by all the required medical and services support. The next layer around the perimeter at each floor level contain the wards. The patient journey is from A&E at the centre, progressively outwards towards the wards at the perimeter. The entrances for patients and visitors are both at ground floor, with a separate service access at the lower ground floor. Patient and visitor entrances are completely segregated at separate sides of the building, with only one single entrance for each. This improves security and reduces confusion for visitors.

As structural engineer Ramboll had to work hard to match the column grid to the irregular and highly specific room layouts. There is often a balance between optimum architectural column grid and a cost-efficient structural grid. In this instance we looked at many iterations to find some degree of regularity but the resulting solution was to move away from a regular grid and to slot the columns into the architectural grid where they would align as a best fit between all floor levels. Since the use of each floor is different there was little commonality of layout between floors, therefore there were limited locations where this was possible. The final arrangement required many of the columns to be offset or rotated by a small amount between floor levels to achieve the optimum architectural layout, without any compromises. Keppie Architects and Ramboll developed full 3D models that were critical in ensuring the coordination of complex column positions, and also the highly irregular slab edge. Despite the bespoke layout the contractor was able to position all the columns and the slab edge without any errors and with a limited number of queries. The layout of the building gave rise to a large floor plate which is also circular rather than orthogonal. Typically the movement joints can be placed across the narrowest part of the floor plate to minimise their impact. These can also compromise effective infection control therefore they should be positioned to avoid critical areas such as theatres. Ramboll carried out extensive analysis which enabled us to avoid a movement joint across the main central hub, with only minimal joints in the corridors between the main hub and the wards.

The success of the design has been recognised by the staff; Lauraine Gibson, NSECH matron commented: “With slightly shorter stay times than predicted, and patients having their speciality care started a lot quicker, many more people are being discharged straight home from here than we anticipated, which is excellent. “In addition, nine out of 10 patients using the emergency department at the hospital rated their care as good, very good or excellent, and 97 per cent of inpatients at The Northumbria would recommend their care to friends and family.” The hospital has had very positive results in terms of empirical data. It is one of only a handful of trusts nationally to meet the target for patients to be seen within four hours during the whole of 2015/16. A 14 per cent reduction in emergency admissions to hospital, with almost 7,500 less people being admitted, has resulted in a £6m saving for the local health economy.

Neil Harvey is a director at structural engineers Ramboll 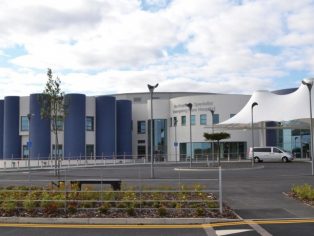 A&E is at the centre of the building, surrounded by clusters of circular hub-and-spoke wards housing diagnostics, X-ray and paediatrics 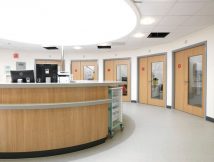