The art & craft of conservation

Built in 1915, the Belsize Fire Station in north London has been called “one of the most distinctive and original” fire stations of that era.

Architects Tate Harmer have transformed the historic building into a characterful new residential development that hosts energy-efficient apartments while retaining and capitalising on its heritage elements.

The Grade 2* Listed building was completed in 1915 by architect Charles Canning Winmill at London County Council. With its steep roof and large dormers, the station is seen as a fine example of the Arts & Crafts style, and given its status, plus the fact it sits near a well-heeled ‘village’ area of London, the design and construction would take place under keen scrutiny.

The project combines a light-touch restoration, preserving original features to provide a ‘boutique’ range of apartments, alongside fundamental improvements to the fabric’s thermal performance. Given there were already bedrooms within the unit (firefighters’ ‘bedsits’ including space for chair and TV), the task of accommodating 19 apartments without drastically altering the building was made somewhat easier.

The station was shut in 2014, and being in a very desirable part of London, quickly picked up by developer Platinum Land, which has a contracting arm, Old House Developments. Another architect initially took the project to Stage 3, but Tate Harmer came on board to “relook at the planning and listing building consent, and try and get more out of the building,” says Tate Harmer partner Rory Harmer. With strong heritage refurbishment experience, Tate Harmer ended up “redoing a load of stage 2, which was a headache to get listed building consent,” and planning permission was finally granted in 2018.

The architects had worked successfully with Platinum Land’s owner Andrew Gillick on the conversion of another important heritage building, a care home in Teddington, into nine townhouses. This helped on the fire station conversion, given that “the listed building process is not straightforward,” says Harmer. “There were times when it was a bit difficult. You have to get the conservation officer on board, submit lots of information; getting planning permission was a bit of a long process.”

There are 19 flats in total, the project being split into two planning applications. One was for the main converted ‘appliance hall’ which previously housed the fire engines, and had a greater amount of heritage to protect, the other for the accommodation wing.

The impressive tower – used by firefighters to practice on small flights of stairs and drain hoses – has been retained, and there’s an application to turn it into the 20th flat. Currently however, the structure, which sits at the corner of the L-shaped building, is inaccessible due to potential danger for occupants.

Form & layout
The design repurposes the open plan ground floor to provide tall apartments; one in the former appliance hall having the original trio of double doors leading out on the street to the north. A variety of rooms have been converted into flats in the main building, such as a billiards room, and the former first floor gym, which is enhanced by exposed beams, tall dormer windows, and a spiral staircase to a mezzanine level.

One of the interventions done over the years by the fire service was a false ceiling to the converted gym space, removed as part of the project. The top of the space now effectively extends up to the apex. He adds that the developer “was a bit reluctant at first, because thought it wouldn’t necessarily generate more value, but he was pretty happy once he saw those timbers.”

Commenting on the dormer-heavy nature of the Arts and Crafts structure, Harmer says: “It’s a complex building because there are all these little light wells and different roof levels, but there’s loads of light coming in.” The roof void over the former accommodation wing to the east, previously unlit storage, was made into three high quality apartments with 14 new dormer windows and reclaimed roof tiles. “We put in windows wherever we could.”

While the layout remained similar in the eastern wing, the designers created some larger units by combining pairs of rooms, which did require some non-structural wall removal. The wing’s dimensions and arrangement happily meant that no internal corridors would be needed, meaning all units have dual aspect with windows north and south, allowing cross-ventilation. There are no internal corridors to the main building either, with the stairwell leading directly to apartments, and an external deck at first floor level. Three units lead onto an external courtyard to the south with private gardens.

There are two small extensions, which presented more design challenges than the conversion. The conservation officer wasn’t keen on the architects’ initial plans to create a distinct modern look for them, which would enable the building’s history to be “read.” Instead they had to source bricks and mortar that were “as close to the original as possible,” and build sample walls onsite, as well as use reclaimed tiles. Their brickwork echoes the Victorian building’s external detail of ventilation gaps between tiles.

The project’s third level is a lowered basement, and permission was given to extend the arched windows down to the new level. The black-framed Crittall designs match the rest of the project, and new light wells created behind provide usable space for occupants.

Retaining character
“We wanted to try and retain as much character as possible,” says Rory Harmer, “so you didn’t step inside and feel you were in a brand new apartment, but that you were in Belsize Fire Station.” To this end, the overarching goal was to ensure the interventions didn’t harm the existing building’s appeal, and external alterations were at a minimum, for example decorative clay tiles built into the brickwork above and below bay windows were preserved. The cobbled access roads to the north and gardens and hedging to the south have been retained.

The challenge in satisfying the conservation officer was around the “significant and interesting rooms,” says Harmer. The double-height ground floor appliance bay is huge (239 m²) , but the conservation officer was adamant it wouldn’t be split into separate units. “The deal was that we would be able to convert it if we kept it one unit, and open plan.” So no solid walls could extend to the ceiling, and the character and materials of the external walls had to be maintained. These included glazed bricks lining the interior and “amazing” metal hooks at high level, used to hold saddles in times past.

Harmer explains the challenge: “We’ve tried to keep everything that was there. Which was difficult, because you get to a point where Building Regs and statutory requirements don’t meet the historic character of the building.” He continues: “On Grade 2* Listed schemes, the conservation officer normally wins out; you end up having to come to a compromise between them and Building Control.” Harmer adds that “tricky discussions” can ensue, for example on fire compliance. Here a mist sprinkler system was specified, “so it doesn’t ruin everything. You open the windows, and within a day everything dries out.”

Most of the original window frames (the timber surrounds) were taken out, repaired and reused, with others replaced like for like. All of the metal inserts were in a good enough condition to be reused. Other features retained include original panelling to the former billiards room, and fireman poles.

Sustainability
As Rory Harmer says, “The most environmentally-friendly building is the one that already exists.” As well as the inherent sustainability of reusing an existing building, the project aimed to “set an example in high-quality low-energy refurbishments of listed buildings,” say Tate Harmer.

The ‘fabric first’ design approach saw improvements made to the building which avoided impacting the ‘heritage fabric,’ including insulation to the roof, basement (250 mm), and most external walls – those that didn’t have any historic features. This was alongside improving air tightness of the entire building including doors and windows. Harmer said however that onerous performance requirements weren’t the priority, due to the listed status: “There is a special dispensation on energy use and U-values.” This offset the heritage constraints on improving the building’s thermal performance, such as on external walls: “where there were glazed bricks, we couldn’t touch the walls.”

One of the things that helped ‘sell’ adding insulation to the conservation officer, says Harmer, was that he was keen on not having services chased into the original walls, “even though the firemen had done that previously, destroying a lot of the previous fabric.” So in many areas where there was no glazed brick, the architects created a service cavity, ran all services into it and applied a layer of insulation. “We extended things like window sills to conceal the fact there’s a service cavity there.”

Interiors
Living rooms are open plan, and these as well as kitchens are south facing. In the main appliance hall the folding doors have been refurbished and strengthened, and can still be opened. To obviate draughts, internal glazed Crittall screens are placed just inside them.

The building uses a communal heating system that has no individual gas connections or ventilation outlets, but individually metered controls in apartments. The previous central plant space was retained at the base of the main stair, so the architects had to find a way to provide two hour fire protection to this important escape route. A cost-effective solution – which avoided a fire curtain and other penetrations to the fabric – involves two doors, one on a magnetic ‘hook’ which shuts when an alarm goes off, providing a double layer between plant space and corridor.

Conclusion
In the words of the project architect, when refurbishing and changing the use of a Listed building to make it a sustainable asset for the future, “you have to do it as well as you can in terms of quality.” Harmer adds: “If it’s done badly and it’s draughty and it’s cold, people are going to soon want to mess around with it and change it, or not live there.” This carefully-designed project demonstrates the converse of that, with all flats selling quickly despite Brexit and Covid’s efforts, and a sensitively improved fabric which preserves this important building for its community. 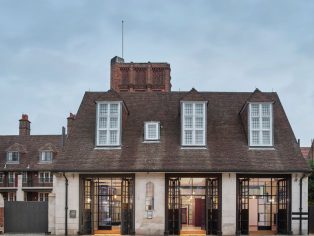 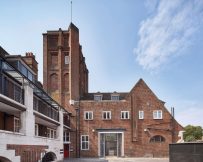 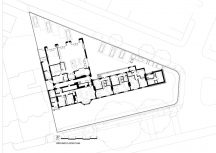 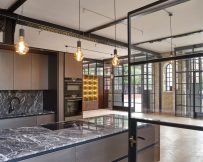 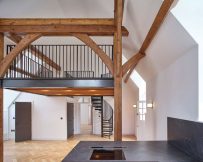 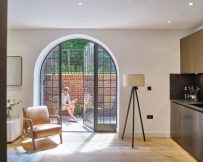