UNStudio has completed designs for the IJbaan: Amsterdam’s future cable car, commissioned by the IJbaan Foundation (Stichting IJbaan). The IJbaan is a grassroots “Amsterdammer” citizens’ initiative, snowballing from a crowdfunding campaign led by Bas Dekker and Willem Wessels started in 2015 and now supported by the Municipality of Amsterdam. Its goal is to create a new connection across the IJ by the 750th anniversary of Amsterdam in 2025.

The one and a half kilometre cable car line is a clean and quick public transport connection between two growing residential areas: Amsterdam-West and Amsterdam-Noord / NDSM. The design consists of three slender pylons and two stations: NDSM Marina on the North Bank and Minervahaven to the South. The cable car is designed flexibly, so that in the future the route can be expanded to include a third station, creating a connection to the Hemknoop, Sloterdijk Station or even Westergasfabriek and the Westerpark, depending on growth and need.

Unique Mobility
The cable car track spans one and a half kilometres, and will take 4.6 minutes to complete a full journey at an average speed of 21.6 kilometres per hour. The passenger cabins have a capacity of 32 to 37 passengers, with additional bicycle cabins with space for 4 to 6 bikes.

“A cable car is an extremely sustainable public transport system. It is a very fast and green way of traveling, which is attractive for cyclists, commuters, students, residents and visitors. In Amsterdam you see a growing need for connections across the IJ, with the new metro and bridges. The city is growing enormously and such an ‘air bridge’ contributes to the development of the entire region. Transport by air also relieves the increasing pressure on traffic and the existing transport network on the ground. It is not only efficient but also fun. People are going to see and experience their city in a whole new way.”
Ben van Berkel

Sculptural Masts
To allow for large ships to pass along the IJ waterway, the towers vary in height, reaching 46 meters to 105 meters on either side of the water, and up to 136 meters in the middle. However, the towers are fully in line with the Dutch capital’s UNESCO World Heritage requirements. While enriching the Amsterdam skyline, the masts are not visible from the famous canal ring in Amsterdam’s city centre.

The cable car’s three slender towers will allow the dense urban area of Amsterdam to expand, while being respectful of the city’s past. The form of the towers themselves directly reference Amsterdam’s robust industrial past of ports and ship cranes. Their sculptural form wading through the water strives to balance playfulness with elegance.

Social Hubs
The cable car stations are not only designed as transport hubs for pedestrians, cyclists and public transport streams to come together, but also as a destination in themselves. The Minervastation is intended as a new meeting place for the growing Western neighbourhood, creating a vibrant urban plaza on the water with restaurant and bar facilities. The NDSM Marine station on the opposite bank provides a transport hub for the blossoming cultural hotspot in the North, with a bus stop, bicycle parking and viewpoint.

The cable car, as a form of transport, fits UNStudio’s mission to develop architecture and urban design concepts that are future-proof, making the living environment healthier. The track also ties in with Amsterdam’s ambition to be Europe’s example for urban innovation, with a sustainable ‘all electric’ public transport system that is optimally linked to existing public transport modalities.

“It is expected that this fast and frequent connection between the West and North will not only have regular traffic, but will also have a positive effect on bicycle traffic as it connects existing networks on both sides of the IJ. The cable car provides an architecturally interesting addition to the city and the harbour view, contributing to the spread of tourism in the city.”
Bas Dekker, founder of the IJbaan Foundation

Gothenburg Cable Car
As the designer of the Erasmus bridge in Rotterdam, UNStudio has a tradition of building bridges and connecting communities over water. Earlier this year, our design for the Gothenburg Cable Car was chosen as a winning design to celebrate the city’s 400th anniversary. The new cable car design includes a three kilometre long connection between the historic Gothenburg centre and new city boroughs across the river. Completion of the project with six towers and four stations is scheduled for 2021. 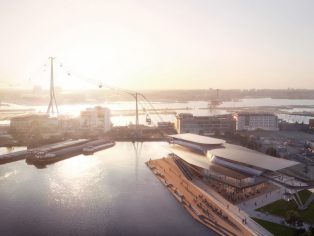 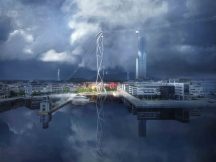