There are 6,000 new ‘true’ zero-carbon homes planned for North West (NW) Bicester – an eco-town scheme given the green light under the Government’s ‘Eco Town Planning Policy Statement 1’ in 2015. Not only this, the pioneering masterplan for the town has its sights set ambitiously on 40 per cent green space – half of which will be public. The plan includes five new schools and hopes to generate 4,500 new jobs – some of which are to be housed at the new Eco Business Centre, courtesy of the Perch coworking startup which operates the centre. Architype were selected to work on broad feasibility studies for the new workspace following a competitive tender hosted by client Cherwell District Council. The council, using Architype’s Enterprise Centre at the University of East Anglia as a precedent, were conscious of the practice’s past work designing and delivering office space which meets stringent sustainability criteria. Entrants to the tender were asked to keep in mind the essence of the overarching town development, as being above all ecological, explains Matthew Hayes, architect at Architype: “When the project came into the office, there was already outline planning permission and a design there.” Hayes continues: “Our first task was to review it, assess it, and make the brief work within the context of the planning – as well as zero-carbon use and BREEAM Excellent, plus ergonomics.” After examining Cherwell’s original design and testing outline planning, the architects realised that the proposal was insufficient for the council’s quota capacity of 125 people, In addition, while Passivhaus credentials weren’t specified in the brief, the architects decided to take the opportunity to up the energy performance, but Hayes notes that “from past experience, achieving the standard on a site like this would require the building fabric to be improved” – Cherwell’s first design being a more traditional brick building. Architype responded with their own scheme that identified elements from the original design that could be carried over to form an upgraded vision for Bicester’s new business centre.

The new eco town covers a large expansion of the city to the north west over existing greenfield, part of which envelops the exemplar masterplan, developed by ADT. Within this is a central hub, which cradles dedicated plots for amenities such as a primary school and ‘eco pub,’ as well as the new commercial scheme occupying a third of an acre. A car park serving the scheme is situated at the northern side of the business centre plot, displacing the building to the south with the intention of eliminating shade over the northern boundary where neighbouring residential properties are located, while shading parked cars during the warmer hours of the day. In plan, the business centre assumes a rectangular shape, while in elevation, the architects designed a simple cuboidal form, three storeys high, devoid of any complex extrusions or elevations. “It does that to reduce the energy demand,” says Hayes. “It wraps around a central atrium, and there’s a really good amount of daylight provided through glazing. But to balance the difference between solar gain and daylight, there are external timber fins, detailed with Siberian larch.” The fins, which extrude slightly higher than roof level, instil a strong vertical aesthetic to the scheme. The fins step in and out in relation to the main body of the building, varying the intensity of shading at different points according to the scheme’s internal profile. The timber detailing is contrasted against crisp aluminium cladding and considerable use of glazing, which simultaneously differentiate the scheme from surrounding residential and civic buildings and “reflect the use of the building – a collaborative high-tech startup environment.” Structurally, the building has a hybrid concrete frame with timber infill. In terms of scale, Architype’s updated design reduces the overall elevation of the business centre from the original design, configuring it in relation to the massing of adjacent buildings. The main entrance to the building is located at the western elevation, opening immediately into the triple-height atrium and top-lit central ‘hubspace,’ and a reprographic area to the right. The north and south elevations are flanked by the centre’s office and consultation spaces of varying sizes – catering for from four to twenty-one users. At the back of the hubspace, to the far east side of the building, are WCs, as well as a lift and staircase which provide access to the first and second floors. On these upper floors, circulation spaces fringe the central atrium’s southern side, also leading to balcony areas above the main entrance at the building’s western elevation. The plant, IT server and main kitchen areas are located on the ground floor in the north east corner in order to create an easily accessible plant area and M&E services at a point in the building that offers residential amenity, while smaller kitchenettes and tea areas serve the first and second floors. “It’s all part of the ‘Tetris’ game of making the building work,” says Hayes.

Above all, a workspace

“We knew it was going to be a community workplace, that was always going to stay the same,” says Hayes. The team envisioned an environment that would constantly be evolving and revolving – a business incubator. In line with this, Hayes continues: “We wanted to create a central area in the building that all the offices are accessed by to encourage collaboration, and increase happenstance interaction and the cross-fertilisation of ideas.” At the very heart of the building, the central hubspace is top-lit and spacious – “somewhere to breakout to”, says Hayes. Considerable attention was paid to the common circulation areas of the building; by creating one primary circulation route with wide walkways and a single staircase, the architects aimed to increase the probability of serendipitous, productive interaction between users. In addition, both the interior and exterior balconies get bigger with every floor upwards, providing further breakout spaces with far-reaching views over Bicester and the surrounding Oxfordshire countryside. Conscious efforts were made by the design team to create an uplifting environment to inspire the business centre’s users. For example, looking up inside the central atrium space, the architects have specified a plywood waffle ceiling: “What this means is that on a really bright day you can see really strong lines and shadows cast onto it. It’s a really animated place.” Vision panels on the partitions and doors separating different spaces aim to evoke an even more spacious feeling in the scheme’s users: “You can see from inside to outside and into all the offices,” remarks Hayes. “Two things we aimed at were; to get as much natural light as possible, and to maximise internal air quality”, says Hayes. Architype’s environmental strategy aims to support a healthy working environment, helping to increase workforce wellness and productivity through clean, optimised air supply and eliminating excessive use of artificial heat and light. The extensive use of glazing on the building envelope partnered with the central rooflight illuminate the interior spaces to provide a naturally bright working environment. Issues related to glare in the upper levels are remedied by outer envelope’s larch fins, in addition to internal blinds. The distance they’re set off from the building varies to provide the right balance and prevent overheating – given the ribbon window of fixed glazing wrapping around the building’s body behind the shading system. “It was an iterative process with the engineers,” says the architect. In order to meet air quality standards specified in the brief, a mixed mode system gives users control over their immediate environments.

While Passivhaus Plus was not targeted in the original client brief – zero-carbon in use being the initial sustainability goal – the design team noticed that with some refining of the proposal, more ambitious sustainability credentials could be within reach. With this knowledge, ecological measures were meticulously woven into the final design, eventually making Bicester Eco Business Centre the first non-residential scheme in the UK to secure Passivhaus Plus standard. BREEAM Excellent was also achieved for the scheme. For example, to minimise energy consumption in use, the balconies create the additional roof area required to maximise solar photovoltaic panel coverage, as well as providing a canopy over the entrance and forming one of the two fire escape routes from the building. District heating supplied by nearby council amenities supplies all the hot water and heating requirements, triple glazing throughout locks in warmth and prevents outside noise from penetrating the office, and where steel components connect to the concrete frame, the architects have inserted thermal breaks. “They wanted as much natural material as possible,” explains Hayes. In response, the architects specified softwood battened acoustic ceilings, rubber flooring, and entrance matting made from recycled truck tyres. The carefully selected materials reduce the building’s embodied carbon but also improve internal air quality. Where possible natural finishes were used, such as an Osmo finish on the waffle-textured ceiling. Compared to the original plans that Architype received at the outset, the overall mass of the business centre has been slightly reduced, leaving more surface area on the plot for landscaping with low-carbon materials. Rainwater harvesting to provide the scheme’s greywater has also been integrated in the car park. With all this considered, the Bicester Eco Business Centre doesn’t just assist the overall eco-town programme in lowering its environmental impact in practice and increasing the number of jobs in the region. Its very purpose of hosting new local SMEs should translate into a heightened perception for environmental concerns, among the individuals and businesses that occupy it. 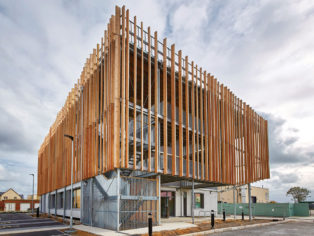 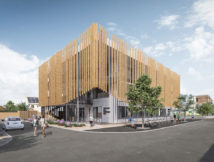 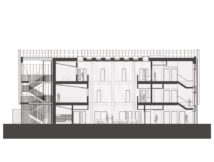 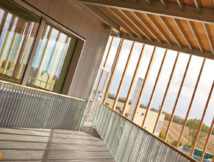 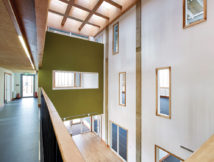 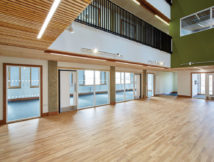