Having set up the first School of Architecture at Lancaster University, Professor Ruth Dalton explains how the school’s ‘radical creativity with a conscience’ motto embeds key principles into innovative teaching practice

While setting up the new school of architecture at Lancaster University, a phrase that we coined very early on – and have returned to again and again – is ‘radical creativity with a conscience.’ It has become an extremely useful concept against which we are able to measure or test any decisions we are making around how and what we intend to teach, and what kind of graduates we intend to produce. But what exactly do we mean by it? Furthermore, might this slogan have some currency beyond our own immediate focus, and resonate with the wider profession?

Before starting to unpick this phrase – why do we need such a concept at all? A generation ago, different schools of architecture certainly had different reputations, but in a rather ‘fuzzy’ way (one school might be more ‘arty’, another more ‘techy’). Equally, architectural practices also had their own identities, specialising in certain typologies, scales or architectural styles. Nevertheless, these reputations were mostly implicit and ‘common currency’; everyone just knew them.

Rarely did architectural practices have a mission statement declaring proudly their unique selling point – possibly just sensible business practice so as not to deter a potential client seeking something outside a practice’s specialism. And, although having a mission statement feels rather in the realm of ‘corporate America,’ we only have to look a little further back in our own history to find both institutions and companies with mottos.

In particular, the ancient trade associations and guilds all had mottos, of which the Worshipful Company of Chartered Architects – admittedly a rather late addition to the guilds in 1984 – had ‘firmness, commodity and delight’ as well as the RIBA’s own motto of Usui civium, decori urbium (for the use of the people, for the glory of the city). Are these really so different from Adidas’ ‘Impossible is nothing’ and Google’s ‘Don’t be evil’? So perhaps it is time for every practice (and school of architecture) to consider adopting their own modern motto (just maybe not in Latin!).

Breaking down the concept

Returning to our ‘Radical Creativity with a Conscience’ motto, the ‘radical creativity’ part is predicated on two things, the first being the emphasis on creativity. This stems from an unwavering conviction that the only way we are going to solve the most difficult problems, is via creative solutions.

And it does seem that we face difficult problems: we are in a transitional time characterised by numerous environmental, cultural and societal issues, all of which have an effect on, and are affected by, the built environment. American designer George Lois said: “Creativity can solve almost any problem. The creative act, the defeat of habit by originality, overcomes everything.”

Where the idea of ‘radicality’ comes in, partly inspired by the history of Lancaster University, is from the idea of being concerned with fundamental change, or change at the root cause of a matter (the origin of ‘radical’ is the Latin radix, meaning root). We see this as a willingness to seek new ways rather than repeating what has happened before, but it is also a challenge to look for solutions beyond the typical professional boundaries, and be more open to different ideas and influences from outside architecture. Maybe being ‘radical’ is simply about asking the different, or awkward, questions, or challenging the status quo and rejecting the commonly held ideas.

With respect to architectural education, it then becomes necessary to ask ourselves two key questions – both linked but different: what knowledge/skills will an architect in this new, changing world need to have? And what is the profession itself going to look like? We would argue that, in a rapidly changing world, one of the skills the architectural profession needs to have is being tolerant of not knowing all the answers. In other words, being comfortable with risk and uncertainty, and there are two interesting corollaries arising from this.

The first is about teamwork. We should no longer promote the myth of the omniscient architect as visionary leader and lone genius, but rather recognise them as a team player (in an often extensive and interdisciplinary team of professionals). For architects who are used to leading, being part of a more collaborative design process with a far flatter hierarchy can require a significant cultural shift. It also requires an ability to be willing to admit to what is not known, and to encourage or seek input from others.

As design, procurement and construction processes become ever more complex and fragmented, the need for strong team-building skills can make all the difference between achieving design goals or not. The second corollary concerns research. Future architects will need the skills to discover things that are not yet known by anyone. This is where research skills come into play: it is about more than simply finding creative solutions for design problems, but rather being able to rigorously and methodically investigate an issue with the aim of creating new knowledge about it – for example a new method of installation – which can then be generalised and shared among the profession. Some of the ideas underpinning ‘radical creativity’ go hand in hand with attributes such as flexibility and agility.

Finally, we arrive at the ‘with a conscience’ part: this is about design being grounded in the real world, and for all people, not just those who, in the past, have been able to afford an architect’s services. It is about design for the wider public (so inclusive design is very much part of this), and with values of society at its core.

In the manifesto produced by Architecture Education Declares, they describe the “intrinsic link between ecological breakdown and social injustice” and it is true that we are becoming a far more unequal society than ever before, with differences found along class, race, age, gender and geographic lines. If concern for others is a core principle of the RIBA’s Code of Professional Conduct, and if our practice is able to ameliorate some of these inequalities, surely this should also be at the heart of all our endeavours. And so, we end up with ‘Radical Creativity with a Conscience’ – what is your motto? 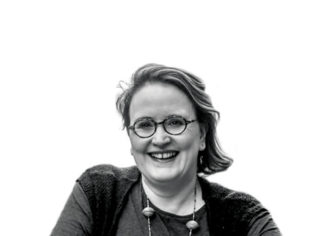 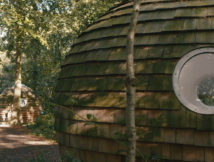 A meeting ‘pod’ in the woods at Lancaster University 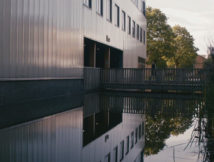 The LICA Building, home of the Lancaster School of Architecture