Export Building, the latest phase of Republic, a wide-ranging offices development in east London, is a refurbishment that fuses engineered timber and a revitalised public realm with a progressive tenancy initiative to create a new destination in Docklands. Sébastien Reed speaks to project architect Thidaa Roberts about the scheme

“It’s right next to East India DLR station. There’s no way you’d accidentally find yourself there; you have to have the intention.” So says RHE Studio’s Thidaa Roberts, painting a picture of the users’ journey to the Docklands site where her firm’s new office building now sits as part of the Republic masterplan. “You get off the DLR, then you go over a pedestrian walkway crossing a motorway below.” She continues: “After that, you have to go down two and a half flights of steps and you’re there. It’s the first building you see.” Studio RHE was called to work on Republic after completing ‘London’s first cycle-in office’, the Alphabeta Building, at 18 Finsbury Square near Old Street for developer Resolution. Garnering numerous awards for the practice, generating significant profit upon resale, and, in Roberts’ words, putting RHE “on the map for refurbished workspaces,” Alphabeta functioned as a sturdy precursor and hallmark of trust for a solid working relationship between the architects and Trilogy Real Estate, an offshoot of Alphabeta’s developer Resolution.

When quizzed on the brief, it’s revealed that RHE’s previous successes provided fertile grounds upon which they could explore new avenues and creative ideas: “The client trusts us, so they don’t really give us a brief aside from cues like ‘more net internal area,’ and ‘we want more people to use to this space,” explains Roberts. “We had lots of freedom, we’d simply suggest something and discuss it.” This freedom granted to the architects was a welcome offering, particularly given the existing site’s lacking visual appeal which, upon arrival, consisted of a set of commercial buildings dating from the late 1980s and 1990s, plus associated landscaping. Tired finishes, absence of facilities, and an uninspiring public realm together inspired a clear path to improvement. Republic’s masterplan was to be built in interspersed phases with the first renovated block, Import Building, completed in 2016 by Studio RHE. Export Building, situated adjacently south to its older sister, was the next focal point for the architects.

From old to new

Its name derived from the historic importance of waterborne trade in the area, Export Building is the new title for the former Capstan House, originally one of four commercial buildings erected on the 0.84 hectare site, with Import Building – formerly, Anchorage House – situated just to the north. Two further buildings which are yet to be redeveloped, Mulberry House and Lighterman House, are located to the south-west of Export Building. A small network of canals outlining the south and west elevations of Import Building separate it from its counterparts. In plan, Export Building forms a rectangle composed of an east and west block, connected in the middle. In section, the building reflects this simplicity. The existing 10-floor block tapers down to eight floors at the south-west side, allowing floors eight and nine to benefit from access to a set of roof terraces with views from the Dome to Stratford and the Olympic Park. The eight-storey block to the south-west and the 10 storey block to the north-east were each originally clad in stone with inset glazing and helmed by two separate mansard roofs. These two elements are connected by a third element clad in curtain walling and connecting to the glazed pitched roof over a full-height atrium at the heart of the building.

The ground floor facade follows this three-part composition by accentuating the entrance at the base of the connecting part of the overall mass. Changes to the massing of the building have been made at ground- and first-floor levels, where an extension fills out the pre-existing granite-arched arcade which previously skirted the building and extends out to the north-east, increasing the volume of area dedicated to retail space at ground level, of which there was none prior to renovation, and office space on the first floor. Across the building, stone cladding has been traded in for timber, black and grey-white gradient coatings and black cladding, while the north-east end features a mural painted with geometric designs in blue, grey, white and yellow. Retained in the new design are elements of the original facade, explains Roberts: “The building itself is very rhythmic in its existing language, so we used that to develop our spacing.” Full-height glazing and a series of white powder-coated aluminium louvres and concave bays featuring doorways accentuated with timber cladding are interspersed along the ground- and first-floor facade, to coincide with the original building’s rhythm. The design limits solar gain while the timber cladding adds a dimension of warmth. A large timber bay signals the entrance to the building on its northern elevation.

Export Building’s internal programme is primarily devoted to commercial office space, which occupies floors two to nine almost exclusively. Four floor plates make up each floor slab, which have been cut back slightly from the original design to open up the atrium and allow more natural light to cascade down into the building. The office spaces are ‘Cat A’ with the suspended ceilings having been ripped out for extra height, exposing the services and giving tenants more freedom to arrange their workspaces as desired. Grey carpets have been replaced with exposed raised access flooring, and walls painted white, reflecting the scheme’s corporate ethos. The ground floor hosts semi-private meeting rooms, and an array of retail and restaurant units which are “open to the atrium space, making the space seem a lot larger,” says Roberts. “We have quite a large atrium space with variant furniture pieces, one long table, lots of small nooks, and a big bar table if you want to do more standing up,” she continues, “the idea is that you can share everything at Republic.” Export Building’s basement is equipped with car parking, 300 cycle stores, two changing rooms, showers, lockers and toilets, the facilities for music events, plus a members’ mini lounge. The 10th floor houses the building’s plant services.

“In particular, we wanted to use timber,” Roberts says, “so we chose CLT and glulam.” Structurally, Export Building’s new elements are constructed using these materials. A glulam structure supports the ground level extension, while a CLT and glulam platform provides even more supplementary net internal area around the atrium. Both Import Building and Export Building have internal atria with generous roof lights. “It’s obviously very warm, and a nice material to work around,” remarks Roberts. “What’s really nice is the contrast between the rough structural concrete on the inside and the CLT.” The main distinction between Export Building and its older sister is the expression of the relationship between CLT and concrete in the former, with the latter being almost completely mono-textural in its use of CLT. Roberts admits that CLT is “a bit design heavy in the beginning – you have to design everything in detail before they cut it. But,” she continues,” what makes it much better for everyone, is that it comes onsite and it just takes a few days to put up – it’s like Lego.” “What was extra challenging was that between floors two, three and four we had tenants in the building, so we couldn’t touch those floors,” says Roberts. “There’s a language happening and then there’s a kind of gap that we filled with twisted yellow fabric.” The previous tenants had a long lease on the floors for disaster recovery measures – protecting their offices.” Renewably sourced Siberian larch is specified for the tapered facade bays due to its durability and aesthetic as it ages, while an extensive planting strategy transforms the flat roof of the new extension into a green roof littered with solar panels providing clean energy to the building.

Roberts notes that compared to similar projects, “there wasn’t a huge budget for it, so we focused on the groundscape and human level. We wanted to activate the whole public realm.” Previously, the vast outdoor space at Republic was under-used, attracting little foot traffic. The architects attributed this to its dated, industrial appearance and lack of amenities. Canals have been widened, and railings around them removed, additionally shared furniture has been added, as well as waterfalls to mask motorway noise. “One thing that was really nice is the public space around it.” At the time of commencing work on the scheme, the architects didn’t realise that the surrounding area was largely residential. After redesigning and redeveloping the public realm with features such as ambient lighting, moveable street furniture, timber decking, new stone tiling and landscaping delivering a huge man-made lake next to the motorway, “all the local residents use the space.”

Commenting on further spatial peculiarities of the scheme, Roberts says: “It’s mostly the public realm space that leaks into the building.” The public realm surrounding the building was envisioned as the same space as the public areas at the ground floors of Import Buildings and Export Buildings. Overlooking the atrium, the office spaces feature full-height glazing establishing strong visual connections throughout the interior space and giving a sense of openness. Additionally, to render the public realm between Import Building and Export Building even more pedestrian-friendly, transport routes hosting buses and other traffic running through the site have been pruned and a turning cycle at the eastern end of the site placed. With its low budget, modest location, and progressive tenancy initiative which curates a healthy blend of occupants based on their specific budgets, Republic is able to offer some of the most competitively priced office space in London. More than a place of business, however, Export Building and its siblings stand a promising chance at supporting a fresh east London destination to both locals and beyond. 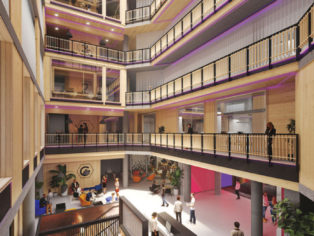 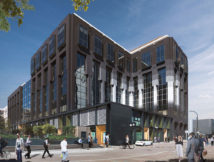 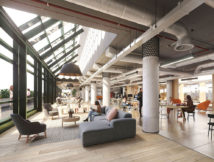 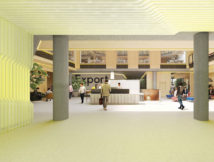 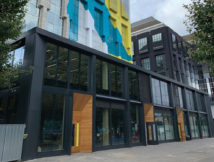 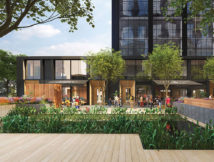 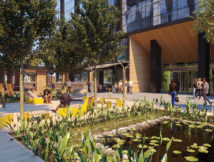 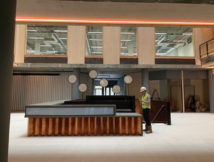 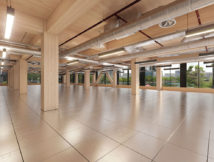 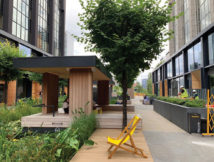 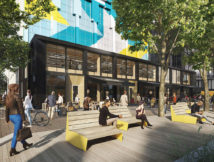