September 3rd, 2021 saw the launch of new branding for VORTICE.

The new logo is a strong visual symbol of change, reflecting the strategic process which has seen the Milanese company, founded in 1954 by Attilio Pagani, transform itself into a Multinational Group which has been able to evolve whilst preserving its origins.

2010 marks the start of this journey with the acquisition of LORAN, now VORTICE INDUSTRIAL, followed by the opening of VORTICE LATAM in Central America in 2012 and VORTICE Ventilation System in China in 2013. In 2019, the takeover of the Spanish company CASALS further expanded this industrial development plan which has seen the number of employees grow from 160 in 2009 to more than 400 worldwide today.

“In a moment of resumption of business post-pandemic, the new Brand is strongly symbolic for us and is consistent with the strategic developments we have put in place in the last few years, including the acquisition of CASALS, in September 2019”, says Andrea Sacha Togni, President of the Group. “This brand refresh allows us to look to the future with positivity and hope.

VORTICE is an international Group of Professionals, people who have pulled together in the last eighteen months and continued to work with resilience and consistency.” VORTICE now presents the widest and most complete range of products in the Ventilation and Air Handling sector on world markets, boasting a Catalogue ranging from Residential to Commercial and Industrial Fans, roof-top and Air-handling Units, Air Purifiers and Sanitizers, Controlled Mechanical Ventilation machines and Smart Home devices.

Over its 70-year history, the VORTICE Brand has undergone a number of revisions and modernisations which have never altered its distinctive feature: the pictogram, which is the visual representation of the name.

This link between the shape and the name has contributed to the strong recognisability of the company Brand so as to be considered a visual heritage of the history of the industry in the sector and of Italy in general. For this reason every change has always been the subject of great consideration.

“The new Brand is characterised by the lightening of certain graphic features which makes it easier to read and identify, in line with an increasingly digital world”, says Riccardo Facci, the Designer who worked on the restyling of the VORTICE Brand. “We have maintained the identifying features, transferring to the new Brand all the value generated over many years of presence on the market, making it a more contemporary one.”

Since the 1960s, sensitivity to Design has always distinguished the company: Marco Zanuso and Francesco Trabucco are two examples of internationally renowned Designers who, over time, have signed VORTICE products which have become true icons of Made in Italy. 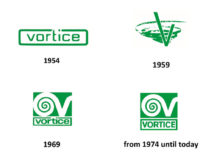