Last month, Pilkington UK became the world’s first flat glass manufacturer to fire its furnace on 100% biofuel. The result: the creation of 165,000 m2 of the lowest carbon float glass ever made.

The world-first trial was part of a multimillion-pound project, aimed to demonstrate how biofuel can present a realistic low-carbon alternative to natural gas when producing integral construction supply chain materials like glass.

The milestone represents a significant step forward in reducing the embodied carbon in buildings. And soon, architects will have more opportunities to specify low-carbon building materials that will create a truly sustainable built environment to help meet net-zero ambitions.

Developers and architects are well aware of a building’s operational carbon emissions – the energy used to heat, cool and power a building. Building regulations, such as Part L in England, which legislate for the conservation of fuel and power, have also focused on reducing these operational emissions to help reach net-zero by the Government’s 2050 deadline.

But this only tackles half the problem when looking at sustainable built environments holistically. Embodied or upfront carbon emissions – the CO2 emitted through the production of building materials including glass, as well as the construction, renovation and demolition process – must also be considered too.

While UK building regulations currently don’t legislate on embodied carbon, it will become more difficult to ignore. Recent data from the World Green Building Council has estimated that embodied carbon emissions are responsible for approximately 11% of all energy-related carbon emissions in the world, and it’s expected to account for nearly 50% of the overall carbon footprint of new construction between now and 2050.

But change is afoot. There’s a growing movement within the building design industry to tackle these “hidden” embodied emissions. Parts of the construction industry have even produced a ‘mock-up’ Approved Document Z as an example of how embodied carbon could be incorporated into the building regulations. It proposes that whole life carbon emissions of buildings would be required to be assessed and reported, with reasonable steps taken to minimise emissions.  With the government following its Part L roadmap ahead of the introduction of the Future Homes and Future Building Standards, it is unlikely that regulation of whole life carbon on buildings will be realised before at least 2025. Increasingly, though, it seems a matter of not ‘if’ but ‘when’.

We are seeing a similar shift from energy to carbon in the EU, with the European Commission proposing that the scope of the Energy Performance of Buildings Directive be extended to include the reduction of greenhouse gas emissions in buildings.

Likewise, many contractors and developers already have embodied carbon targets for projects, and several local authorities, including Westminster City Council, Brighton, Oxford, Hammersmith, and Fulham, Camden and City of London, have already started to enquire about the embodied carbon footprints of developments.

Irrespective of regulatory changes, reducing embodied carbon will be essential for achieving the net zero buildings of the future. But where can architects make these carbon savings in their projects?

For example, in a glass furnace, burning gas is pumped into a 20-metre-long chamber to heat it to 1,600 °C, causing raw materials including sand and recycled glass to melt to the consistency of treacle. This is then floated on top of a bath of molten tin, making the glass perfectly flat before being cooled. The CO2 emitted contributes to the embodied carbon of the glass produced, and in turn, the carbon footprint of the project it’s eventually used in.

However, in Pilkington UK’s four-day trial, the gas in this process was entirely replaced by a sustainable biofuel made from organic waste materials, which emits around 60% less Scope 1 CO2 than traditional natural gas used. This cuts thousands of tonnes of CO2 from the production of architectural glass each year.

While this work is currently still in the trial phase, it has substantial backing. It’s part of a £7.1 million project led by industry research and technology organisation Glass Futures, working under the Department for Business, Energy and Industrial Strategy’s Energy Innovation Programme. And it’s moving rapidly – the technology was initially demonstrated on a container furnace only a year ago and is now capable of running an entire float line for four days. It demonstrates the power of collaboration, and what can be achieved when industry, academia and public partners work together.

Looking to the future

The innovation at Pilkington UK means we’re now far closer to glass with less embodied carbon being accessible to architects. In the future, lower carbon glass could be available for specification, driving down the overall carbon footprint of a development to create more sustainable buildings to meet increasing environmental demands of clients and potential future regulations.

Additional specialist functionality can also be added to this low carbon glass, to help reduce operational carbon. For example, solar control glass allows daylight to pass through a window or façade while reflecting away the sun’s heat to help prevent overheating in the summer. Conversely, low-emissivity glass, reflects the energy emitted by heating systems and surfaces back into the room, while also allowing the heat of the sun’s rays to pass through the glass and passively warm the house during the winter. Such specialist products reduce reliance on a building’s heating and cooling systems, improving its overall environmental performance and decreasing operational carbon.

By looking holistically at a building’s whole life carbon emissions, both operational and embodied, and identifying sustainable solutions that help to reduce both, we can lessen the impact the building and construction sector has on the planet and contribute to achieving net zero.

It’s important to remember that biofuel isn’t the fait accompli for decarbonising industry. Last summer, Pilkington UK became the first glass manufacturer to successfully manufacture flat glass using hydrogen. However, a significant body of work remains before hydrogen, or indeed electrification, become feasible alternatives to natural gas for industry. Instead, biofuel represents a real opportunity for architects to reduce the embodied carbon of materials they specify, while innovation catches up with ambition. 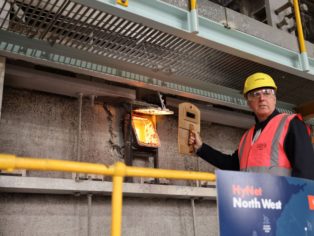 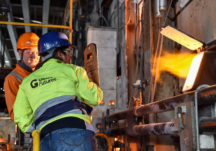