Sonnets in Babylon by Daniel Libeskind

Daniel Libeskind’s project for the Venice Pavilion at the 2014 Venice Biennale is a meditation on the origins and destiny of form in architecture.

Sonnets in Babylon extends a line of questioning begun in 1985 by the architect with his presentation of three machines known collectively as Three Lessons in Architecture at the International Architecture Exhibition in Venice, for which he won that year’s Golden Lion Prize.

Its central element is a series of 100 drawings that Mr. Libeskind created by hand from pen and sepia-toned wash mixed from coffee grounds. Never before exhibited, the drawing series is screen-printed on large-scale glass panels and arranged around the curved wall of the pavilion so that light is reflected and refracted between surfaces like biomorphic prisms.

Displayed by chapters, the drawings depict a space in frozen flux, a kind of “favela of the mind” or metamorphic city of the future.

As the theme of this year’s Biennale focuses on the “fundamentals” of architecture, Daniel Libeskind has set out to create a symbolic matrix that encompasses architecture and drawing, materiality and poetry, and the city and the imagination. The architect raises the question of whether `Form’ is disappearing into `Techne’ or continually emerging as the permanent expression—indeed, the fate—of human beings. Lev Libeskind for Libeskind Design. 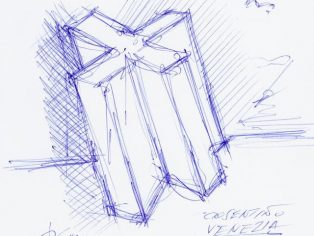