The annex to Lambeth Palace Library was crowned best public building and supreme winner at this year’s Brick Awards.

Designed by Wright & Wright Architects, this contemporary building is home to the Church of England’s library and national archive which includes historic documents including the death warrant for Mary, Queen of Scots, signed by Elizabeth I.

The winning design features a nine-storey central tower, crowned by a viewing platform and flanked by four- and five-storey wings all of which are clad in handmade Ibstock bricks.

The annex to Lambeth Palace Library is one of 17 winners in this year’s Brick Awards, which recognise and celebrate the best use of brick in the built environment. The judges for this years’ awards described Wright & Wright’s design as:

“Excellent, courageous and rigorous in its use of brick as a primary cladding material for this important building. The choice and detail of the brickwork is integral to the success of the building, in terms of its relationship and dialogue with Lambeth Palace. The careful mixing and batching of three subtly different shades of red brick, combined with the restrained use of textured panels and careful proportions of the openings all soften the unapologetically massive volume and give the whole an understated elegance.”

Other 2021 Brick Award winners include:

Architect Alma-nac’s design for the aptly named House-within-a-House, which won the Individual House category with its design for a modern home created by shrouding an existing 1950’s house in a new three-storey brick structure.

This is an inspired, economical and sustainable means of extending the house, which simultaneously resulted in a thermally efficient, contemporary dwelling. Now, wrapped in its new exterior skin, replete with a new pitched roof, the house once again references its Victorian neighbour while its contemporary, asymmetrical street elevation successfully reinstates the rhythm of the street.

In contrast to the urban location of House-within-a-House, Haverstock Architect’s scheme for a new Crematorium for West Lindsey District Council is located in parkland.

This scheme won the Architects’ Choice category. It uses a combination of brick and timber to create an elegant building designed to connect with the landscape to enhance the overall feeling of tranquility. The judges described it as a very striking building on a very limited budget.

de Metz Forbes Knight Architects’ scheme for an extension to a 1980s office building in Kings Cross uses brick innovatively to form a lattice curtain around the new highly-glazed structure. This scheme’s perforated brick facade won the Innovation Category for transforming what could have been a very average-looking office block into something architecturally delightful and visually interesting. The judges said the building’s striking appearance “contributes to the streetscape of this rather dull stretch of road.”

All of the category winners at this year’s Brick Awards show what can be achieved with well-considered design, robust brick detailing and careful delivery.

The full list of winners for the 2021 Brick Awards:

Supreme Winner and best Public Building
Project: Lambeth Palace Library
Architect: Wright & Wright
Bricks: Ibstock
Judges comments: Excellent, courageous and rigorous in its use of brick as a primary cladding material for this important building. The choice and detail of the brickwork is integral to the success of the building, in terms of its relationship and dialogue with Lambeth Palace. The careful mixing and batching of three subtly different shades of red brick, combined with the restrained use of textured panels and careful proportions of the openings all soften the unapologetically massive volume and give the whole an understated elegance.

Individual House
Project: House-within-a-House
Architect: alma-nac
Bricks: Michelmersh
Judges comments: This house is a crafted and ingenious solution to creating a modern infill dwelling with reference to the Victorian context, on a site with an existing post war house, but encasing the existing dwelling rather than demolishing it. It is a lesson in sustainability as well as in proportion and form.

Housing Development – Medium
Project: The Officers’ House Royal Arsenal
Architect: Allford Hall Monaghan Morris
Bricks: Ibstock
Judges comments: This project is a skilful solution lovingly retaining a historical listed building and combining it with a new building addition. Quality homes have been created using a mixture of traditional and modern methods of construction. It has been well implemented in a crafted manner. The final result is a joyful juxtaposition of old and new.

Urban Regeneration
Project: Hackney New Primary School
Architect: Henley Halebrown
Bricks: Wienberberger
Judges comments: Definitely a masterclass in the unlikely marriage of an inner city school and block of flats!  The complex master-planning of the tight urban corner site to house an inner city school for small kids along with with a tower of luxury flats was handled very well in design. Play-spaces and rooftops were wonderfully maximized where possible. A lot of thought and care have been given to the design and how things come together and how each element work with the operation of the school. Very impressive!

House Builder
Project: Redrow Homes
Bricks: Ibstock
Judges comments: Good use of urban design and master planning together with use of materials, detailing and layout. The choice of bricks and wider materials fitted in well with the surroundings and helped to secure the outcome of a successful design process.

Commercial Building
Project: i9 Wolverhampton Interchange
Architect: ION Developments
Bricks: Ibstock
Judges comments: This is a superb commercial workspace building – well executed and constructed with crisp detailing and striking features. It makes a strong statement at the exit of the station, and the entrance to Wolverhampton city centre. The way the building has been designed gives elegance and form using strong brick materiality to this key location and presents itself as a proud new local authority building.

Refurbishment
Project: John Morden Centre
Architect: Mae
Bricks: Ibstock
Judges comments: A very clever building structured around a linear route that uses brick to strong effect as a robust face both inside and outside. Really considers the needs of the specific older user group and designs well for them without being at all institutional.

Outdoor Space
Project: The Newt in Somerset
Architect: benjamin + beauchamp architects
Bricks: Northcot Brick
Judges comments: Overall, an incredibly impressive and ambitious project. The use of brick is mainly in the rebuilding of existing walls (in both new and reclaimed bricks) and associated landscape features (eg new retaining walls and pond edgings).

Innovation
Project: York House, Kings Cross
Architect: deMetz Forbes Knight Architects
Bricks: Forterra
Judges comments: An innovative use of brick executed perfectly, a great example of refurbishment and extension to a 1980 building which could have been demolished otherwise. It’s striking appearance contributes to the streetscape of this rather dull stretch of road.

Craftsmanship
Project: Wolverton Hall Folly
Architect: Quinlan Terry Architects
Bricks: Michelmersh
Judges comments: The Wolverton Hall Folly is an exquisitely executed octagonal tower, an unforgiving geometry, which required extremely precise brickwork drawings and accurate design of specials. There is almost no tolerance in the design, which is the minimum size required to accommodate the staircases. The project’s success therefore hinges on the craftsmanship of the brickwork and the precision with which the brickwork was planned

Specialist Brickwork Contractor
Swift Brickwork Contractors
Description: The company has been at the forefront of innovation within our industry for many years and have developed new processes and skills that will ensure brick is a material of choice for architects, for generations to come.  Some of the most iconic buildings in the capital have used processes developed by Swift Brickwork.

Worldwide
Project: Tangzhuang Village Community Centre
Architect: SHEN yue
Bricks: Reclaimed (Provenance Unknown)
Description: With its design rooted in the region’s traditional culture, the building is built to create a rich cultural activity space for villagers and tourists, to boost neighbourhood relations, and to alleviate the current situation of rural population loss. The project primarily uses the old black brick collected from the demolished or unlawful buildings in Tangzhuang. 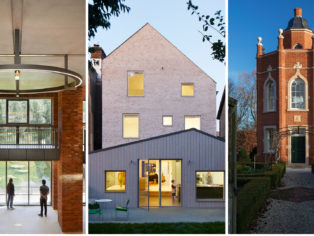