Having a solid understanding of how a facade system will perform prior to construction is crucial for architects, consultants and building specifiers.

The Centre for Window and Cladding Technology (CWCT) is one of the UK’s leading authorities in the field of glazing and building envelopes. Based in Bath, the centre helps to set and regulate industry standards in building envelope design and construction.

The centre offers a varied range of information which apply to different aspects of a building design. The CWCT Standard for systemised building envelopes was published in 2006 and is applicable to curtain walling, walls with ventilated rainscreens, and overhead glazing.

What is rainscreen CWCT testing?
A rainscreen test – or as it’s officially titled, a CWCT Sequence B Facade Test – is designed to test the serviceability and durability of a facade system in accordance with the appropriate standard (CWCT Standard for Walls with Ventilated Rainscreens).

A facade system is fixed to a full scale rig at a UKAS accredited testing site, and once the system has been installed it is put through a series of tests that determine serviceability. These tests focus on:

Once the test is completed, the system is fully dried, cleaned and all joints are sealed in preparation for the next test.

Test 2 – Wind resistance testing (serviceability & safety)
Test probes are positioned across the facade system to register panel deflection and the test rig is fully sealed. A fan is connected to the system void so either negative or positive pressure can be created.

First the test simulates the system being pushed against the wall, increasing in stages until the safety point is reached.

Following this, pressure is added to the void to test the system being pushed away from the wall. As before, pressure is increased in stages until the safety point is reached.

The serviceability test simulates changes in high winds and measures any deflection of the system.

The safety test is done at higher pressure – where the defections aren’t considered.

Test 3 – impact resistance
In the impact resistance test a series of impacts are recorded using a steel ball and a 50 kg leather bag of glass beads. These objects are swung from the pendulum to directly impact the facade system in several positions.

Impact resistance is one of the most important properties for a facade designer to consider. Not only the ability of the material under test to resist impact – factors including how that material is fixed, what material it is fixed with, and how it transfers its impact load to the building will impact on its overall resistance. It’s imperative that impact testing is carried out prior to ensure the correct system is selected for the project.

Understanding the specific requirements of your project ahead of testing is crucial to evaluating what CWCT results are acceptable on any live project. Ultimately, full scale mock-up testing of a facade will save significant time and money by identifying how a facade will perform, and allow for any necessary amendments to be made to design and materials prior to the construction phase. 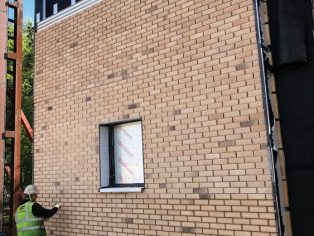